Mahāyāna in Europe: Japanese Buddhists and Their Contribution to Academic Knowledge on Buddhism in Nineteenth-Century Europe

At the turn of the twentieth century, the popularity of Buddhism in Europe grew significantly. Under the influence of the life reform movement, which promoted causes such as peace, vegetarianism or animal rights, members of the urban upper classes converted to Buddhism. The appeal of Buddhism broadened through the popularisation of Zen Buddhism by D.T. Suzuki, first in America during the interwar period, and eventually in Europe after World War II.

Despite its popular appeal in the twentieth century, European knowledge about Buddhism actually can be traced back to the eighteenth century, when British, French and German indologists first gained access to Sanskrit and Pali texts. In the nineteenth century, early exposure to Buddhism reached a first peak in the philological disciplines. At the same time, the notion of ‘world religions’ began to form, and Buddhism from the beginning was counted among their number. Consequently, previous scholarship has considered ‘Buddhism’ a nineteenth century orientalist construct. Buddhism, according to this narrative, was seen as a philosophy originating with the Buddha as its founder, and later forms of Buddhism, such as those practiced in contemporary East Asia, were viewed as degenerate. Furthermore, this European ‘invention’ is said to in turn have influenced Buddhist traditions in Asia, spawning various reform movements.

In contrast to this received narrative, it has to be pointed out that already in the second half of the nineteenth century the process of the construction of ‘Buddhism’ was a global one, the protagonists of which were by no means restricted to Europeans. Especially the activities of learned Asian Buddhists in Europe had a significant influence on the scientific understanding of Buddhism. Among the earliest of these were Japanese Buddhists who travelled to Europe since the 1870s, mostly in order to study philology with prominent European orientalists, an endeavour which was to assist them in developing a scholarly understanding of their own schools’ fundamental scriptures. As a matter of fact, these Japanese ‘students’, most of whom belonged to either the Pure Land (Jōdo shū) or True Pure Land (Jōdo shinshū) school entered into a process of intense and mutual exchange with their European ‘teachers’, from which the latter did not emerge unaffected.

The most important of the Japanese Buddhist, along with their direct European mentors were:

The aim of the present project is to offer a more nuanced and complete account of scientific knowledge of Buddhism in late nineteenth century Europe through a consideration of the direct transfer of knowledge carried out by Asian Buddhists, especially Japanese clerics. Of particular interest is the influence this Asian contribution to European knowledge about Buddhism had on the early scientific engagement with religion in Europe and, ultimately, how it impacted the scientific conceptualisation of religion as such. The project is predicated on the thesis that the way in which Japanese Buddhists presented their religion in Europe coincides with a wider trend towards the ‘spiritualisation’ or ‘interiorisation’ of religion around the turn of the twentieth century. Representatives of Asian religions were already under the influence of this trend, yet also actively participated in its amplification. The final aim of this project is thus to make a contribution towards demonstrating the great degree to which global knowledge of religion had already been entangled towards the end of the nineteenth century.

The German Research Council (DFG) has provided three years of funding for the exploration of these questions in the context of the project ‘Mahāyāna in Europe: Japanese Buddhists and Their Contribution to Academic Knowledge about Buddhism in Nineteenth-Century Europe’, based at the Department of Japanese Studies at the University of Heidelberg. For the duration of the project from April 2017 until March 2020 a team of three main investigators and research assistants will systematically pursue the question of the contributions made by Japanese Buddhists to European knowledge about Buddhism before 1900.

Introduction of the Team 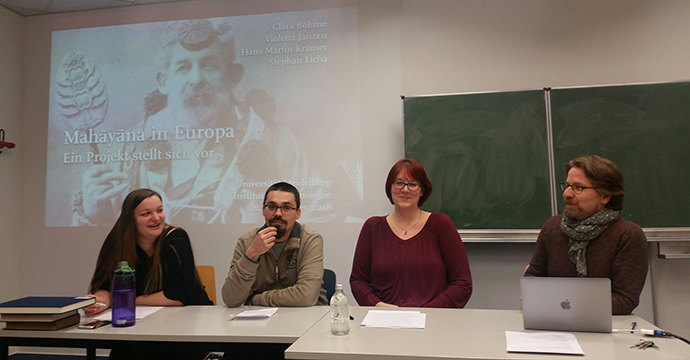