search | contact
Home > Research >  Environments, people and mining in the Far Southwest of China since 1500 >

A model of deforestation caused directly by mining in the area of Dongchuan prefecture, 1700-1800

Northeastern Yunnan was the area with the highest density of mines in the Southwest during the Qing period. Exploitation expanded rapidly after the Dongchuan and Wumeng, areas formally part of Sichuan and ruled by Yi (Lolo) lords since the Yuan period, were conquered and their territories added to Yunnan province in 1726.

The map below shows the area of the two prefectures of Zhaotong and Dongchuan, which were formally founded in 1726 and fully brought under direct Qing control by 1730. In addition to political borders and the large rivers, the map shows the relatively level plateaus (bazi) that were used for irrigated agriculture (light yellow) and as pastures (light green) as well as the larger mines. 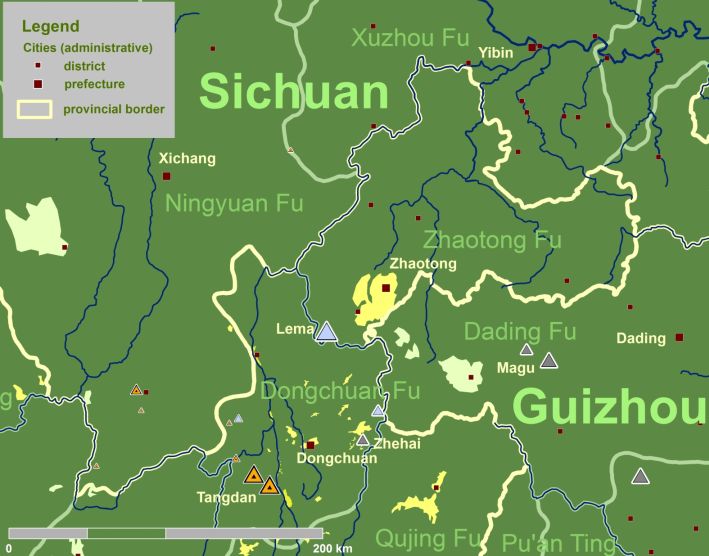 Copper, zinc and silver mines were most concentrated in Southern Dongchuan, but important sites are also found in adjacent Huili in Sichuan provinc, in Ludian in Zhaotong prefecture, and in Weining in Guizhou province.

We know very little on historic landscapes and land uses. The only relatively good set of data is the output of the copper mines in Southern Dongchuan. Data on the output of the other mines is not available; we have to make do with an overall ranking in importance.

The model works on the following premises:

1) At the outset of the investigated period, the entire area was forested with the exception of relatively level land suitable for grazing and agriculture, of low-lying valleys and altitudes above the treeline. these areas are assumed to have been static because the transformation of pastures to farmland have no effect on the deforestation process.

2) Deforestation caused by other human activities is intentionally left out.

3) The exploitation of forests for burning charcoal was similar for mature and young forests due to the preference of diameters within 5 cm.

4) For simplicity, clearcutting is assumed.

6) As charcoal demand for smelting dwarfed all other uses of wood (timbering, machinery, housing, firewood), only smelting is considered.

7) Smelting copper consumed an equal amount of ore and charcoal.

8) The reconstruction of acreage of forest consumed for smelting proceeds in the following steps: The metal content in the dressed ore was 30%, outputs are converted to dressed ore accordingly. The ratio of fresh wood:charcoal was 3:1. 400 m3 of wood were harvested per ha.

9) The model proceeds in 10-year steps for copper mining. For other mines, patches are indicated on the basis of an overall importance only.

10) Forest regrowth is assumes after 20 years, renewed harvesting after 40 years. 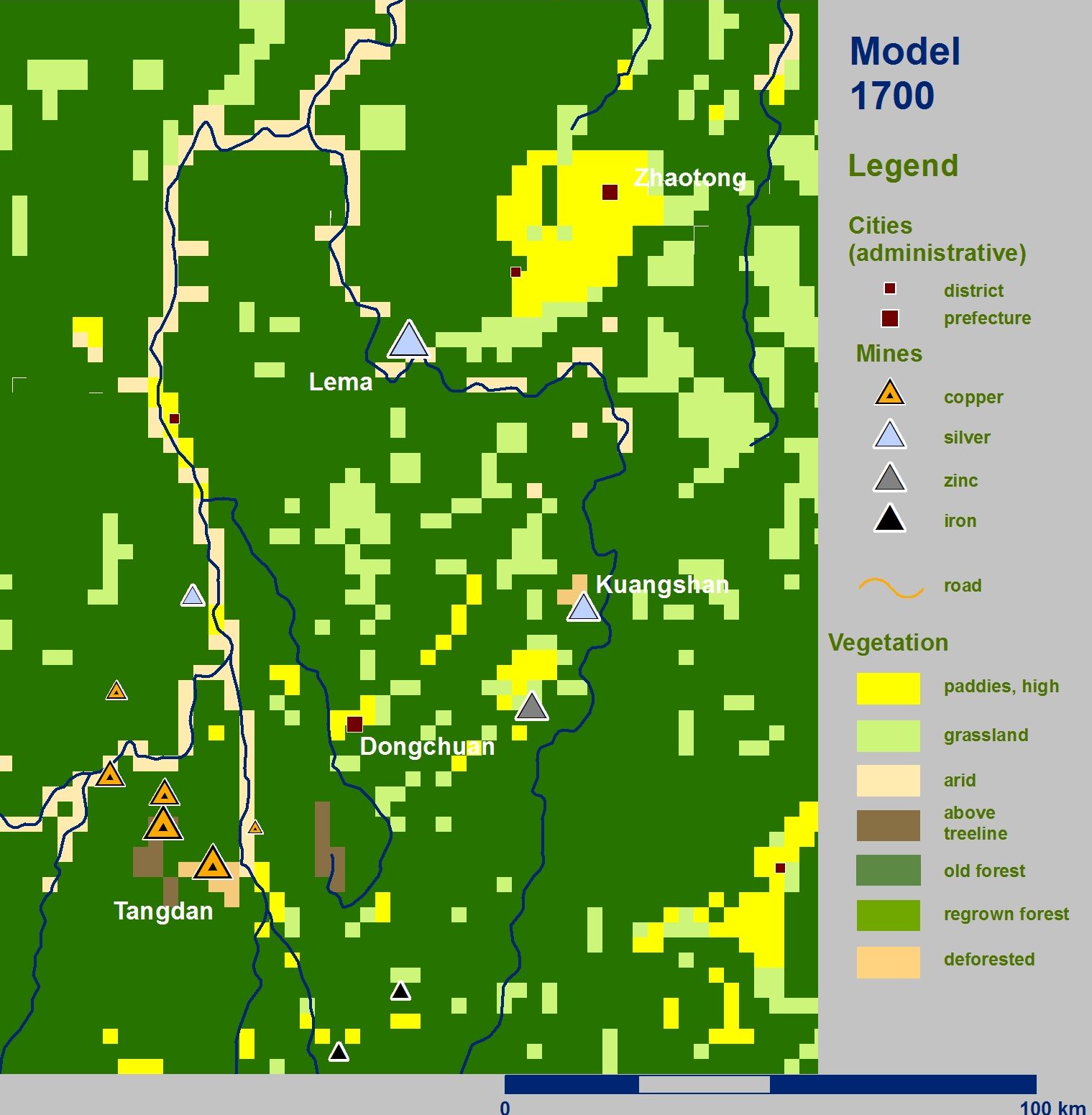 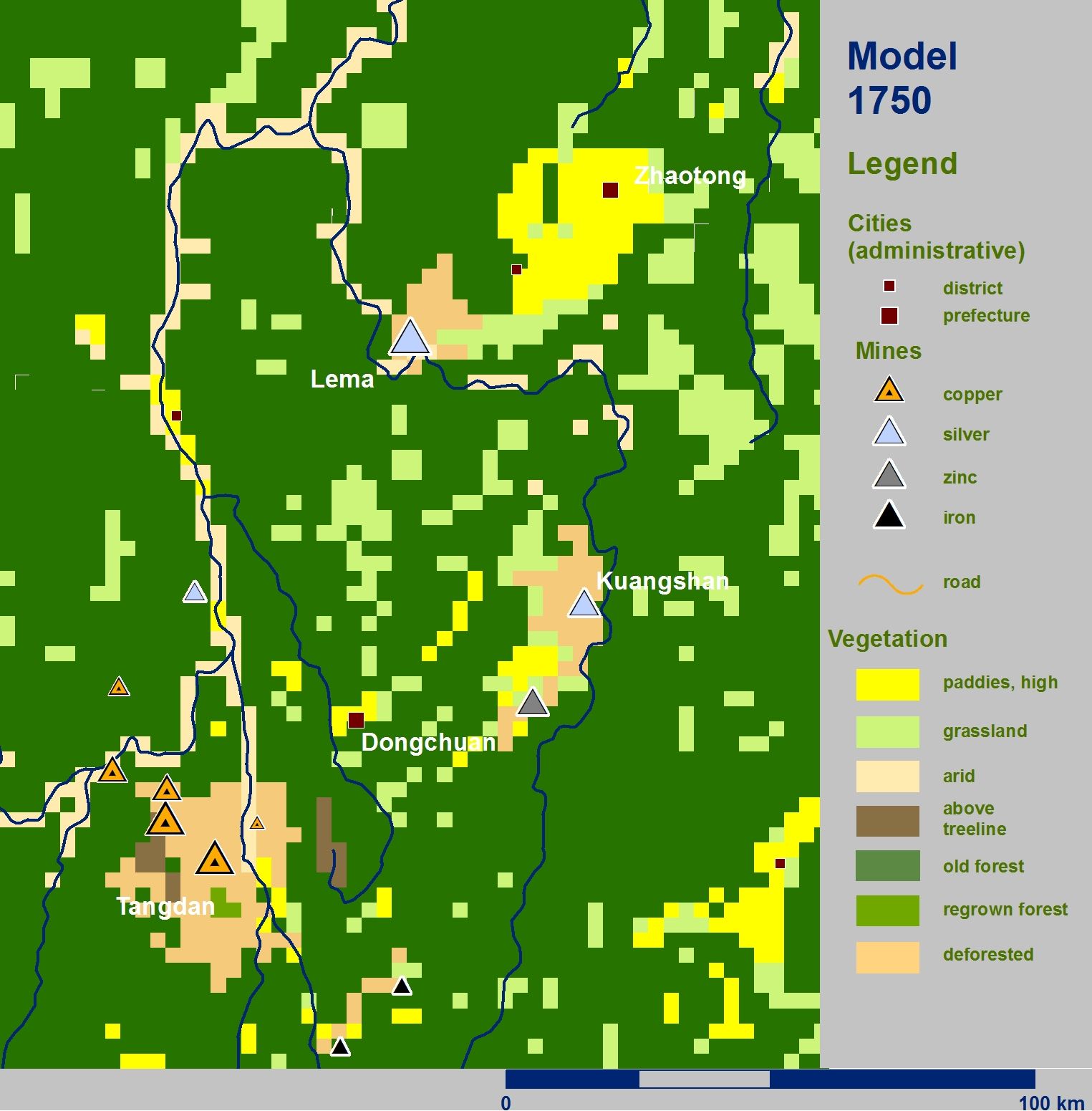 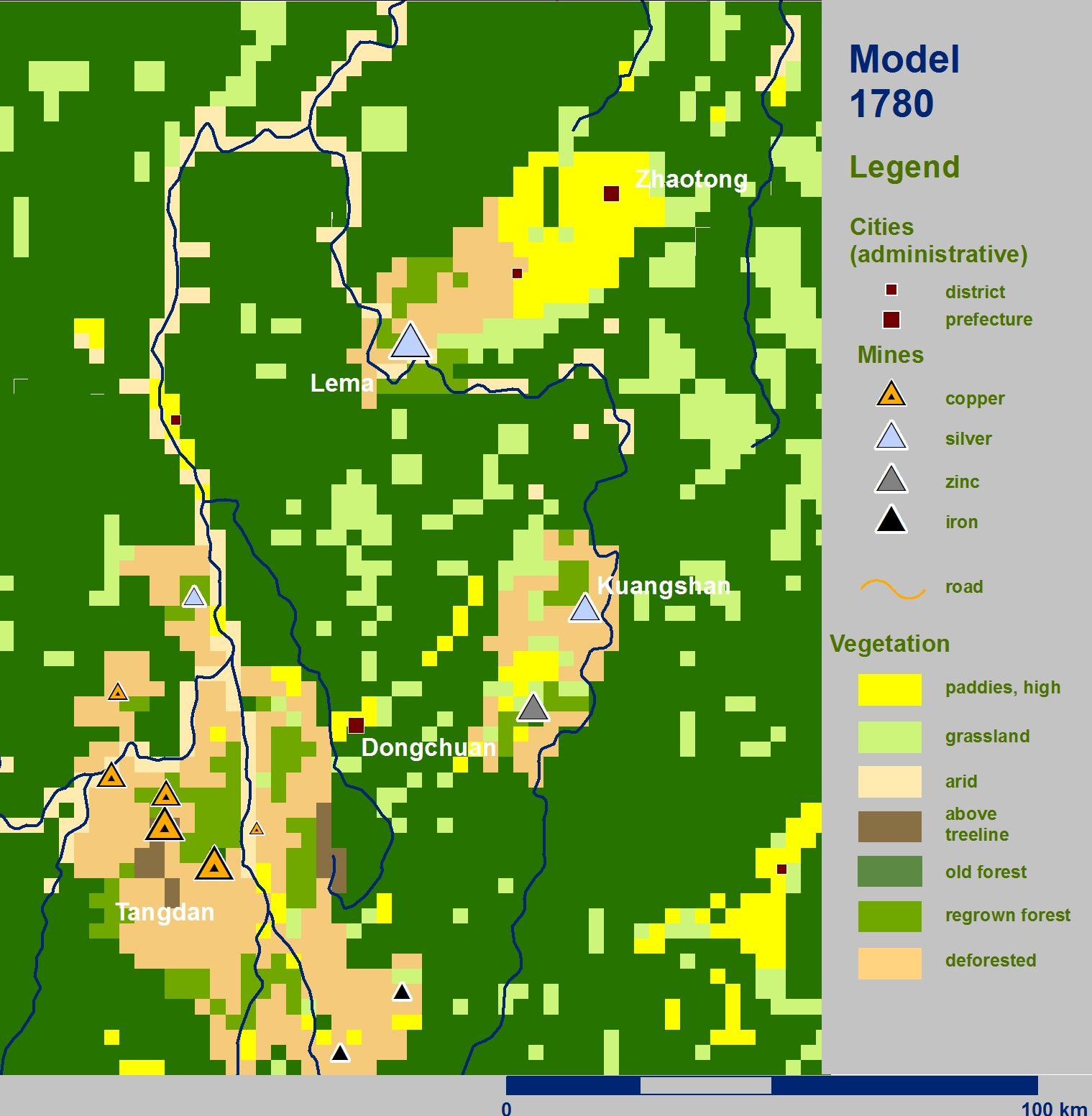 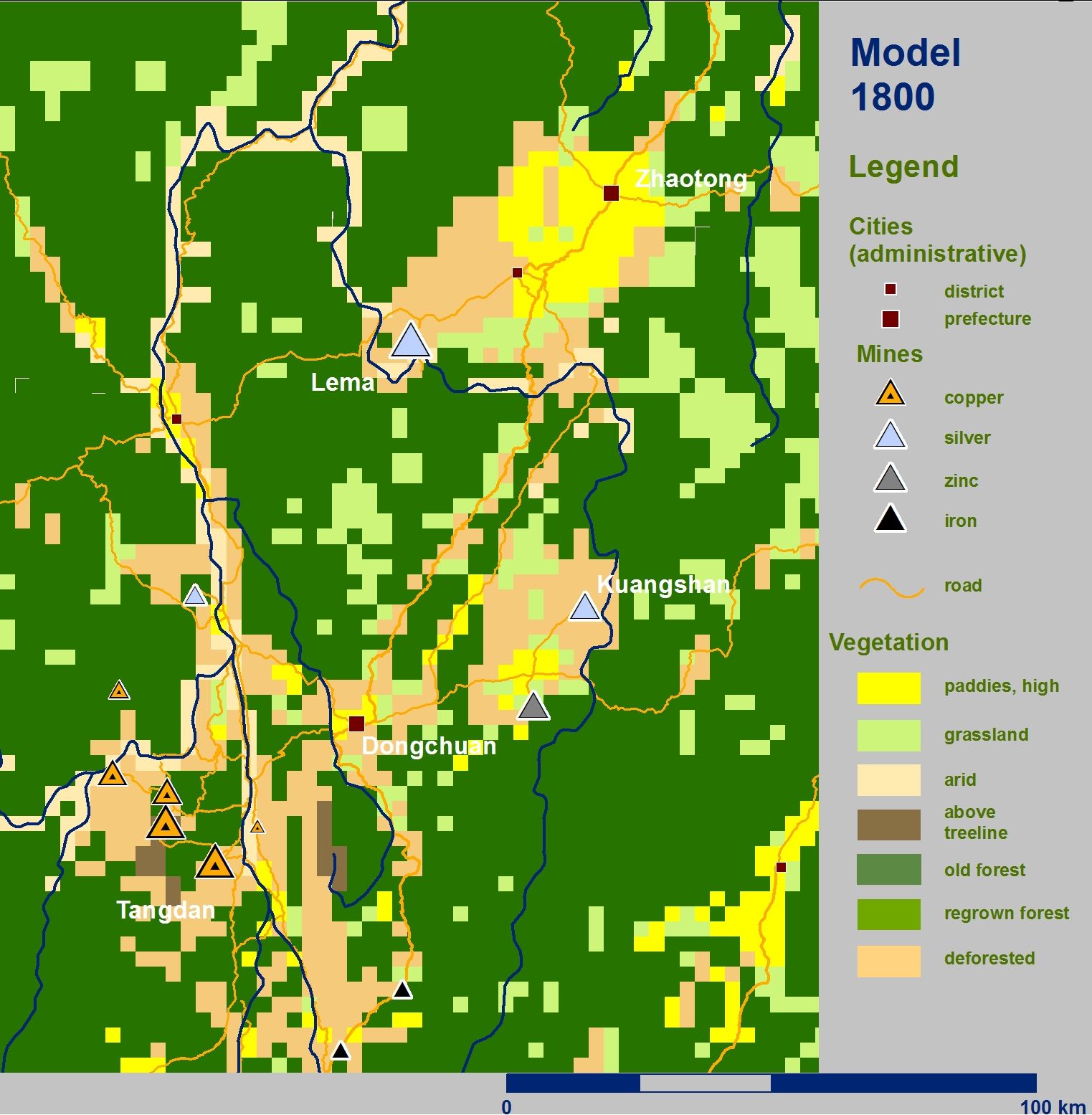 The model shows a rapid expansion of deforested areas with the early expansion. The process stagnates with forest regrowth and the stagnation of outputs on a relatively high level.

Preliminary result: Deforestation was limited by terrain and transport conditions. As a result, charcoal supply was in fact the crucial bottleneck to the expanding the exploitation of ores and to maintaining large mines, as historical records suggest.

The distribution of deforestation can be compared to a map of about 1970 that shows the remaining forested areas in the period of peak deforestation of the 20th century:

The comparison of maximum deforestation around 1970 with the modeled maximum deforestation caused by mining around 1780 indicates that historic mining may have indeed denuded large perimetres around the copper mines of southern Dongchuan, and the silver mines of Kuangshan and Lema. At the same time, it shows the southwestern flanks of the Hongwangshan Massif south of the Tangdan Mines among the more forested areas by 1970, suggesting regrowth after the end of intensive mining. At the same time, the advanced denudation of Northern Dongchuan, especially around Qiaojia on the Jinshajiang cannot have been caused by historic mining.