The PhD dissertation, submitted in 2005 and published as a book in 2006, dealt with higher education reform in Japan between 1919 and 1952. While the conventional view holds that the reforms introduced by the US American occupation authorities after the end of World War II were epoch-making, this study stresses the preparatory character of reform discourse and practice before 1945, especially during the 1930s. As a result, common conceptions about prewar and wartime fascism and postwar democracy, especially the social values associated with these epochs, are called into question.
In 2012, Hans Martin Krämer submitted his Habilitation thesis on the subject of the birth of a modern concept of religion in Japan. Based on conceptual history, it is shown that the assumption of cultural dominance by the West, which emphasizes how “religion” in Japan has been and is shaped by a Christian Protestant understanding, is simplistic. An analysis of both the early modern prehistory of the neologism shūkyō 宗教 as well as debates on religion and state in the early Meiji period (between roughly 1868 and 1876) shows that the Japanese actors had their own interests and agendas, largely independent from the supposed semi-colonial dependence on the West.

1. Mahāyāna in Europe: Japanese Buddhists and Their Contribution to Academic Knowledge of Buddhism in Nineteenth-Century Europe 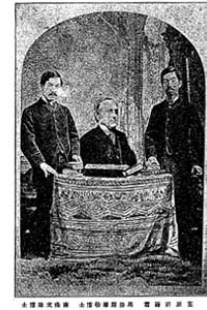 According to current scholarship, the history of the European knowledge of Japanese Buddhism can be traced back to the World Parliament of Religions in 1893 or, more substantially, to the reception of D.T. Suzuki (Snodgrass 2003, McMahan 2008). More recently, Urs App has highlighted the central role of the Jesuit missionaries to Japan for European knowledge of Buddhism between the sixteenth and the eighteenth centuries (App 2010, 2012), but the role of East Asian Buddhism in the qualitatively new European discussion of Asian religions in the second half of the nineteenth century has (other than that of Indian Buddhism and Hinduism) hardly been illuminated.
Reception must here not be understood as a one-sided process initiated by Europe, but was instead marked by the active role of East Asians, in the early days mainly Japanese. The contacts of Shimaji Mokurai 島地黙雷 to Léon de Rosny (around 1870), of Nanjō Bun’yū 南条文雄 and Kasahara Kenju 笠原研寿 to Friedrich Max Müller (around 1880), and Takakusu Junjirō 高楠順次郎 and Fujishima Ryōon 藤島了穏 to Sylvain Lévi (around 1890) were decisive for European orientalists’ understanding of Mahāyāna Buddhism. In addition, the last three decades of the nineteenth century were also the period of the formation of the discipline of religious studies in Europe and thus the first period during which a “scientific” concept of religion was negotiated. The exciting question is thus how knowledge about East Asian religiosity mediated by East Asians was a factor in shaping the academic understanding of religion right from the beginning of the latter’s formation on.
This project will be funded by the German Research Foundation (DFG) with two positions for researchers starting in April 2017.

2. Spiritual Pan-Asianism: The Religious Dimension of a Political Movement in Early Twentieth-Century Japan 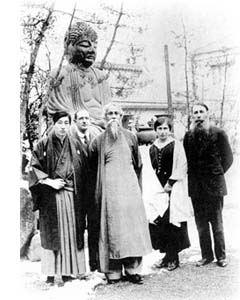 The role of Asianism or Pan-Asianism in finding a political and cultural identity for modern Japan has been researched intensively over the last few years (e.g. Esenbel 2004, Aydin 2007, Hotta 2007, Saaler and Koschmann 2007, Saaler and Szpilman 2011). Yet from a religious studies perspective it is striking how a methodological secularism has led scholars to ignore motives not reducible to economic or political rationality – despite the fact that many historical individuals and groups identified with religious movements or ideas, clearly not simply for strategic reasons. As an innovative research perspective, it is precisely this lack of a division between “political” and “religious” motives from the subjective perspective of historical actors which is of interest.
Examples for institutions include Japanese muslims, the secret society Kokuryūkai 黒竜会, the theosophical movement in Japan, Baha’i adherents, or a part of the new religious movements such as the Japanese Ōmotokyō 大本教 or the Chinese Shijie hongwanzi hui 世界紅卍字会. Individuals who combined political pan-Asian agendas with religious goals, many of whom were united in the anti-colonial struggle in India, include James Cousins, Paul Richard, Ōkawa Shūmei 大川周明, or Tanaka Ippei 田中逸平. The French Paul Richard, a former Protestant pastor, then a protagonist of spiritual and theosophical circles in Paris, before traveling to India where he met the political activist and later guru Sri Aurobindo, is a particularly interesting example, not in the least because it is so little known. In 1914 Richard traveled to Japan together with his wife, who was later to become the spiritual leader of the Sri Aurobindo Ashram; both stayed in Japan for four years, where they built extensive networks with anticolonial activists from all over Asia, at the same time never giving up a spiritual vision for a religiously united Asia. The first goal of this project is to collect the writings and papers of Richard, which are to be found all over Europe, India, Japan, and North America (where Richard spent the last years of his life), an effort which has already started with the help of collaborators from Japan, the United States, India, China, and several European countries. 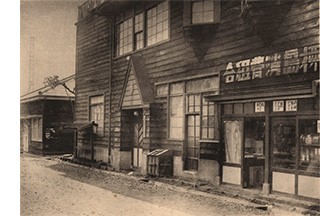 In 1923, progressive professors and student activists from Tōkyō University joined to build the Tōkyō University Settlement House in the impoverished industrial Honjo ward. In operation until 1938, the settlement sought to transcend mere social work and initiate an autonomous worker’s movement through providing the knowledge and self-awareness among the proletariat necessary to “eliminate social flaws through their own initiative” and “combat exploitation independently,” in the words of Law Professor and settlement initiator Suehiro Izutarō.
Although the settlement’s powerful financial supporters included the Imperial Household and it was considered a model of social work by the Home Ministry, many of its members were in fact Marxist-influenced students. The ambitious activities of the settlement were carried out through a broad program which included a labor school for factory workers providing night classes taught by professors and students and agitating for labor union participation. The labor school produced several prominent labor leaders and future Diet members. The settlement program further provided classes for adults and children, child care, a consumer cooperative, legal counseling from law professors and a free medical clinic. The settlement house also contained rooms for students to live among the proletariat and realize the ideal of “entering into the masses.”

4. The Social History of Human–Animal Relations in Early Modern Japan 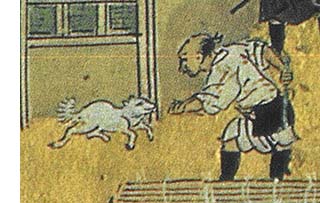 Investigations into contemporary Japanese attitudes towards animals frequently highlight an irritating combination of a high degree of consumption of animal products (meat, leather, animal testing) and at the same time the almost entire lack of typical counter reactions to these (animal protection movement, vegetarianism). One attempt at explanation, prominently represented by the work of Richard W. Bulliet (Hunters, Herders, and Hamburgers, 2005), argues that the lack of daily contact with livestock in the past has prevented the emergence of a sensibility towards problems involved in mass use of animals; at the very least, Japan has not witnessed the traumatic experience of the transition from a “domestic” period of living together with animals to a modern “postdomestic” phase of distance to production animals, whose numbers, however, have dramatically increased at the same time.
While this explanation is plausible in itself, it operates on the unquestioned assumption of a lack of intensive contact with animals in Japan before the nineteenth century. Beyond stating that there was no intensive mass animal farming in premodern or early modern Japan, however, the history of everyday experiences of Japanese with animals has in fact never been the subject of research. To what degree were animals actually used in everyday life, especially in farming? How close did humans and (production) animals live together? Due to a dearth of sources, these questions are not easy to answer. A first attempt will be made, however, by tapping agrarian manuals (nōsho). These were produced in great numbers during the Tokugawa Period (1603–1868), and although most of them do not treat animals as their main subjects, many do in fact contain chapters, passages, or brief remarks about animals. Based on the 72-volume edition Nihon nōsho zenshū 日本農書全集, such passages will be evaluated, before drawing on further textual and visual sources at a later stage of the project.

A complete list of all publications is available via the Heidelberger Dozentenbibliographie.
Seitenbearbeiter: bbsd
Letzte Änderung: 19.05.2022