The Hachiman Digital Handscrolls Project (HDH) is a pilot study to enhance digital presentations of movable image-and-text formats. The innovative open source system HyperImage is the pivotal tool employed to realize the aims of the project.

HDH offers an innovative access to seven digitized Japanese illuminated hand scrolls ranging from the 14th to the 19th century. Each version tells the same story: The first part covers the prehistoric pregnant Empress Jingū and her alleged conquest of the Korean kingdoms by help of indigenous deities. This colorful myth is followed by the empress’s birth of the future Emperor Ōjin, and his manifestation as the Hachiman deity. Hachiman’s miraculous appearances and oracles as well as the foundation tales of the most famous Hachiman shrines cover the second part of the scrolls. The title of the scrolls reflects the gist of the scrolls, “Karmic Origins of the Great Bodhisattva Hachiman.”

The HyperImage environment allows the user not only to manipulate the speed of viewing and zooming in on details of the entire hand scrolls, but also provides transcriptions of the calligraphies and offers English translations. Additionally, the user may opt to use extensive annotations on the materiality, depicted motifs, calligraphic styles and political, religious or ritual background information. Furthermore, the seven scrolls can be flexibly compared with each other.

The great variety, but also the similarities of style, contents, and interpretation of this highly influential narrative over the centuries will be presented at the users’ fingertips. In sum, the HDH offers the opportunity to experience Japanese handscrolls in ways, which reflect virtually how viewers at the time may have looked at one set of handscrolls, while at the same time offering possibilities of comparisons and supplemented knowledge, that were not possible until recently.

Version I of the project was funded by the Excellence Initiative at Heidelberg University, Field of Focus 3 “Cultural Dynamics in a Globalized World,” subcategory "Core Facilities", sponsored by the German Research Foundation between March 2014 and February 2015. The project was extended and completed in October 2015 with funds of the project head.

The overwhelming success of the project (see response) and valuable feedback from visitors of the site resulted in an expansion of the HDH project, funded by the project head. Version II consisted of a seminar (see below), and the addition of Japanese translations, and will be inaugurated on March 1, 2017. 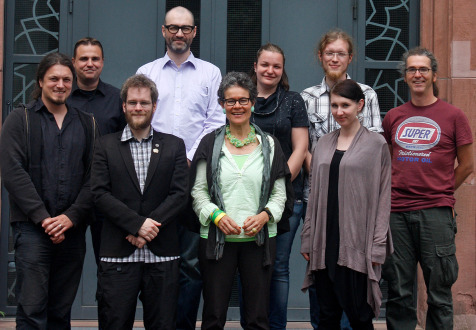